An Ohio Valley woman continues the mission of the YMCA

Last year, Tara Bailey relocated her family from the Mountain State’s capitol to Parkersburg with the purpose of continuing her mission with the YMCA.

As a young woman, Bailey began working as a membership assistant at the YMCA of Kanawha Valley in Charleston, West Virginia. Over the next 24 years, she would climb the organizational ladder while also furthering her education. In September 2016, Bailey became the CEO of the Parkersburg YMCA, marking the first time a woman has held the permanent executive director position at the 100-year-old chapter.

A year after her arrival in Parkersburg, Bailey says her family has been embraced by their new community. She admits that the Parkersburg chapter is much smaller than its counterpart in Charleston, but says she has welcomed the change.

“This is a different type of town. Parkersburg has more of a hometown feel,” Bailey said. “I’m amazed at all the people in the community wanting to help the Y and wanting to see the Y flourish.”

She said Parkersburg has welcomed her entire family with open arms. Bailey has a blended family comprised of her husband Jay, and grandchildren Tabitha, 14, and Ethan, 16.

“We’re raising a second family,” Bailey said. She also noted that the family’s loyal boxer dog Lott also made the journey to Parkersburg.

Bailey says that Parkersburg provides lots of things to do, including festivals and family events. One of the family’s favorite activities is exploring West Virginia and Ohio by car and motorcycle. The family also enjoys time on their boats on the Ohio River.

“We like to take day trips to places we’ve never been before.” she says. “Sometimes those day trips turn into overnight trips. We really enjoy the scenery.”

In her time in Parkersburg, Bailey says it’s been easy to get involved in the community. She says that nonprofits in the Mid Ohio Valley work closely together to serve the region.

Bailey herself has gotten involved with the Rotary Club of Parkersburg, which is working on projects such as revitalizing the downtown area. 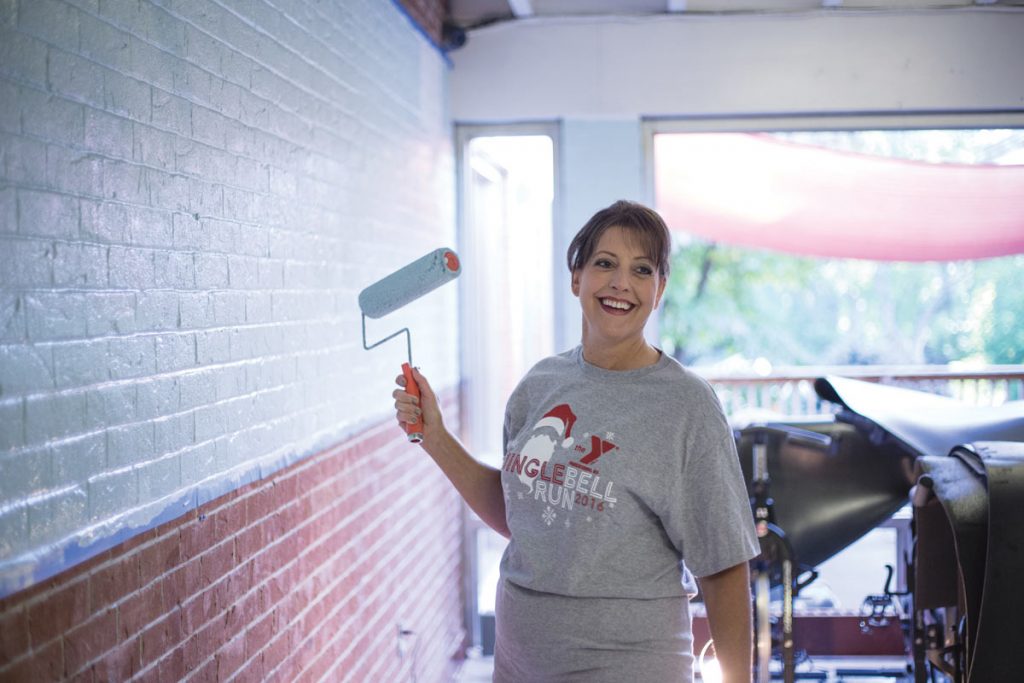 It’s Fun to Work at the YMCA!

It was a friend who worked at the YMCA in Charleston who first introduced Bailey to the Young Men’s Christian Association.

“She said it was a great place to work,” Bailey recalls. Today, she says that her friend was right.

In addition to being able to advance her career, the YMCA has allowed Bailey to continue her education. Over the years, Bailey obtained her associate’s and bachelor’s degrees from Ohio Valley University in Vienna, West Virginia and in December completed her master’s degree at Springfield College in Springfield, Massachusetts.

Springfield College was established in 1885 originally as the School for Christian Workers. The school was initially created to train YMCA employees. It has since become a public college offering degrees in many fields.

It was at this same college that the game of basketball was invented in 1891 by a professor from Canada. Just four years later, another YMCA employee in Holyoke, Massachusetts created the sport of volleyball. Racquetball is also credited as being spawned by the YMCA.

“For the YMCA to offer that opportunity was tremendous,” Bailey said of her education.

The YMCA was created in 1844 in London to provide low-cost housing for young rural men (and women at the Young Women’s Christian Association) who were traveling to work following the Industrial Revolution. By offering wholesome lodging and recreation, the organization worked to keep young people out of the bars and brothels and on the right path.

Today, many think of the Parkersburg YMCA as simply a fitness center — a place to lift weights or swim a few laps.

“Most people walk through the door with a reason or purpose to come here (such as exercise) and find so much more,” Bailey said. She said that people not only come to the Y to work out, but also to just be with other people.

“It’s about socialization and being part of the community,” she said. “They’ve found friends here. It’s more about relationship building.”

“It’s more about sportsmanship, fair play and getting along,” she explained.

The organization is working to make sure youth in Wood County have a safe place to engage with their community. The Parkersburg YMCA provides after-school programs for youth of 20 elementary schools in Wood County at 13 different locations. Currently, there are about 500 children that take part in the Y’s after-school program. The program provides activities, homework assistance and snacks for participating children.

For those kids in the child development center, Bailey said they receive breakfast, lunch and two snacks. For some low-income children, the meals served by the Y may be the only food they get that day.

Bailey said that most of the families served by the YMCA receive financial assistance. For those families, the YMCA is there to fill the gap in the community. To make memberships to the YMCA affordable for all, the community pitches in to provide scholarships for low-income families.

“When people have things to do and places to go, they’re less likely to get in trouble,” Bailey said.

Another important aspect of the YMCA for Bailey is teaching children to swim through its aquatics program.

“With our location being on the Ohio River and the Kanawha River, water is all around us. Kids are curious and they naturally gravitate towards water,” she said, emphasizing that swimming is a survival skill that all people should have.

“Learning to swim will save lives,” she said.

Bailey admits that the Parkersburg YMCA wasn’t in great financial shape when she took the reins, but says the center is still expanding and improving its facility to bring more people in.

“We want people to focus on the positive things in life and enjoy things with their whole family,” she said.