Cars can mean a lot of things to a lot of people but classic cars almost always have some deeper special connection between owner and machine. For Meigs County residents Rita Morrison and her brother George Morrison Jr., their 1967 Chevrolet Camaro RS helps keep the memory of their late mother Lois alive.

On Oct. 14, 2014, Lois Morrison lost a battle with kidney disease. Rita and George had taken it upon themselves as Lois’ caregiver as she battled and her death brought sorrow and also isolation for the siblings.

“After she died, the grief overtook us down to where we didn’t do anything,” Rita said. “We’ve loved cars all of our lives and we’ve always wanted a car. To get us out of our funk, we felt we needed to do something.”

That “something” came in the form of a 1967 Chevrolet Camaro RS that sports a stunning Rallye Green color. Taken against a blue sky background, there are few car-related scenes that can compare to the beauty of this beast with a true 327 engine.

There are aspects of the car that aren’t stock to 1967 — including the color which debuted in 1969. The console should have a T shifter but instead sports a horseshoe out of a 1968 but otherwise the car is as it should be.

Lois would have been proud.

“She loved old cars and car shows so ever time we go out we have a piece of her with us,” Rita said. “The grief is still there but the car does help both of us get up and get out and do things on the weekends and we’ve met wonderful people.”
The car show crowd has helped Rita and George remember their mother by connecting with others. Although she couldn’t quote an exact number of shows they’ve entered, Rita said the car has earned awards at every one of those shows including one held on the anniversary of Lois’ death this past October in Glouster.

The siblings first had their eye on a 1969 convertible but when they approached Cruisin Classics about the car, it still needed more work than what the two had hoped. Instead, they were shown this yet-to-be-detailed ’67 Chevy with the Rallye Green coat and their purchase became a no-brainer.

“There’s always somebody that comes up and asks questions about it, compliments it,” said Rita. “The thing we most enjoy with it is at shows when a little one fascinated by it gets behind the wheel or someone who was a teenager when the car came out sees it. I’d give anything to see what’s in their mind because it takes them back.”

“It’s not about the awards,” she added. “It’s about the reaction it does for people.” 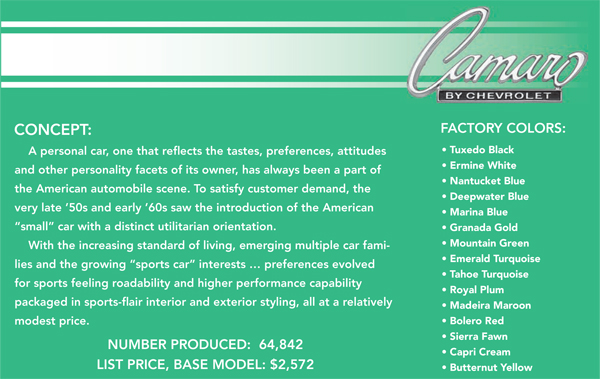